On 6 November 1750 Flora married Allan Macdonald of Kingsburgh and this is their wedding lines.

Flora led an eventful life. After her famous involvement in the escape of Charles Edward Stuart following the Battle of Culloden in 1746, she was imprisoned briefly in the Tower of London. In 1747 she was pardoned and returned to Skye. In 1773 she was visited there by Dr. Johnson, who describes her as

'a woman of soft features, gentle manners, and elegant presence.'

The following year, Flora and her family emigrated to North Carolina. On the outbreak of the War of Independence her husband was appointed brigadier-general by the governor, and she accompanied him in his campaigns until he was captured and imprisoned in Halifax, Virginia, when at his suggestion she returned to Scotland. Four years later her husband was released and rejoined her.

Flora died on 5 March 1790 on Skye, and it is said that over 3000 mourners attended her funeral at which 300 gallons of whisky were drunk. 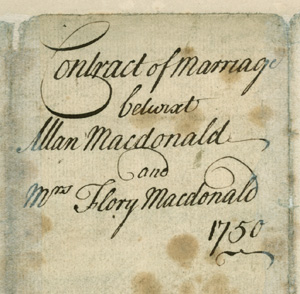