This undated letter, written in a shaky hand, is compressed at the end as the writer runs out of paper. There is no way to tell to which death sentence it refers. If it was written in 1661 or 1681 the appeal is being made to Charles II. If it was written before his execution in 1685 it is addressed to James VII and II. 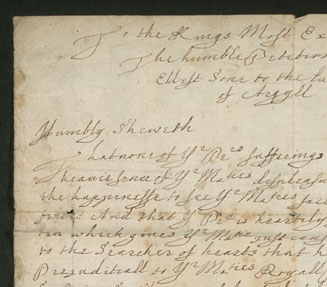 Click on the image to view in more detail.