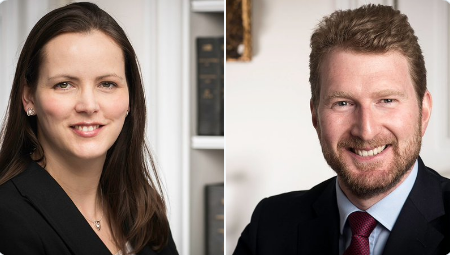 TWO members of Faculty have been appointed as sheriffs.

Jillian Martin-Brown, a summary sheriff in Tayside, Central and Fife since 2016, will sit in Dundee, while Fergus Thomson is to be based in South Strathclyde, Dumfries and Galloway at Airdrie.

They are among eight new sheriffs appointed by Her Majesty on the recommendation of the First Minister, on the basis of a report by the Judicial Appointments Board for Scotland.

Ms Martin-Brown has had particular responsibility for the Problem Solving Court in Forfar as a summary sheriff. She became a member of Faculty in 2010 and practised mainly in personal injury and medical negligence. Her appointment date is 4 November.

Mr Thomson qualified as a solicitor in 1996 and was called to the Scottish Bar in 2004 and has specialised in contentious work as junior counsel and also as a Legal Director with DLA Piper. He is a Writer to the Signet and a Fellow of the Chartered Institute of Arbitrators. His appointment date is 13 January, 2020.