After 60 years, retired QC is reunited with award-winning play 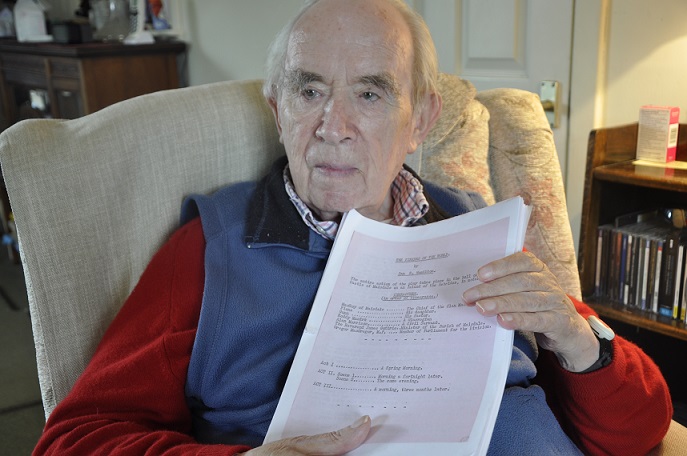 HE'S known for taking the Stone of Destiny from Westminster Abbey, but Ian Hamilton also has award-winning playwright high on his CV.

The 93-year-old retired QC wrote The Tinkers of the World when Anthony Eden was Prime Minister and Elvis had his first chart hit.

The play enjoyed a successful theatre run, and was adapted for radio and featured Roddy (Para Handy) McMillan and Annette (One Foot in the Grave) Crosbie. It received the 1957 Charles Henry Foyle New Play Award, and can be mentioned in the same breath as the likes of A Touch of Honey which took the title the following year.

Mr Hamilton had long forgotten about the play but now, more than 60 years later, he has the script back in his hands, after an original was unearthed and new copies made.

“I couldn’t believe after all this time that there would still be a copy of the play out there. It certainly takes me back to see it,” he said.

In casual conversation, his good friend, Kevin Drummond, QC, a retired sheriff, had asked Mr Hamilton about the play, and said he would like to read it. But Mr Hamilton did not have a copy.

Both men are members of the Faculty of Advocates and Mr Drummond tried the Advocates Library, which has a section for original works written by members but it did not include the play. However, the library has close links with the National Library of Scotland.

“The National found a copy in archives it holds of the former Gateway Theatre in Edinburgh. The copy was one used in the staging of the play. It is typewritten, but you can see Ian’s handwriting in various alterations to the script. I was amazed to see it,” said Mr Drummond.

The Tinkers of the World is set on a Hebridean island which is about to be taken over by the government and used for a rocket range.

“I thought it must have been inspired by the rocket range on Benbecula, but Ian said the play had been written a couple of years before the base was established, and this was life following art,” added Mr Drummond.

Further research by Jane A Condie, of the Advocates Library, showed that the play had a run at the Gateway Theatre, Elm Row, Edinburgh, from 4-16 February, 1957, and was broadcast on the BBC Scottish Home Service on 29 April, 1957, and was afforded a highlighted presentation in the listings of Radio Times.

New copies of the 80-page script have been made, and one has been given a home in the Advocates Library, and the other gifted to Mr Hamilton.

He said: “The recovery of this script is a triumph of research, as well as a delight for me. I must thank my old friend, Kevin, for starting the hunt, and Jane Condie for her skills and diligence and patience, and all who helped her.”