THE Faculty of Advocates is proud custodian for the nation of “a most curious Scots relic” from the Battle of Flodden.

The standard of a Scottish nobleman which was carried into battle that fateful day - 9 September, 1513 - is now to be found adorning a wall in the Faculty’s Lord Reid consultation centre.

The 1.41m(4ft 7in)- long banderole escaped the English onslaught, thanks to the cunning of its bearer, and in later centuries it was gifted to the Faculty by his descendants.

With the motto Veritas Vincit – Truth Will Prevail – and three stags’ heads, the flag was the standard of William Keith, 3rd Earl Marischal of Scotland.

It was carried by his standard bearer, “Black” John Skirving, of Plewlandhill, East Lothian, in the Battle of Flodden.

Unlike some 10,000 of his countrymen, and the King of Scotland, James IV, Skirving survived, although wounded, and was taken prisoner by the English.

With admirable loyalty, Skirving had concealed the banderole about his person and it went unfound by the enemy during his several years of imprisonment.

The flag was handed down in the Skirving family until the beginning of the 19th century when William Skirving, of Edinburgh, presented it to the Faculty.

In a letter to the assistant librarian, William Gibb, in 1808, Skirving wrote: “As You have lately expressed a wish to obtain for the purpose of being deposited in the Library of the Faculty of Advocates the Bandrol I shewed You many years ago…this Bandrol is now sent You for the Purpose above expressed, and I authorise You in my name to offer it to the acceptance of the Faculty as a most curious Scots relic.”

He went on: “What I know of its history is that it has been in Possession of our family (Skirving of Plewlandhill) from time immemorial and the tradition of the family has been that my Ancestor Black John Skirving carried it at the battle of Flodden field, as Standard bearer to Earl Marischall.

“At this disastrous battle, my Predecessor was taken prisoner but saved the colours by tearing them from the Standard to which they were attached; & concealing them about his body…he was kept prisoner in England some years…”

In 1891, the standard was included in a Heraldry exhibition in the then new National Museum of Antiquities of Scotland. And in 1999, it was part of the Scottish National Gallery’s exhibition, Raeburn’s Rival: Archibald Skirving (1749-1819).

Described as “a very simple flag”, it is hand-stitched and made from three widths of beige silk, probably once blue in colour, and trimmed with a pale gold silk fringe. The stags’ heads were painted. It has a piece of material running along the edge of the hoist end which appears not to be part of the original. It is believed that Black John caused damage in ripping the banderole from its pole and wrapping it around his body, and that the torn end was subsequently repaired. 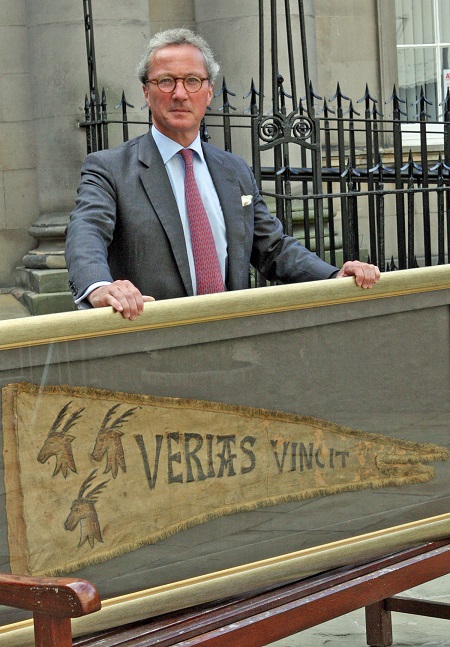 The then Dean of Faculty, Richard Keen QC with the flag on the 500th anniversary of the battle in 2013