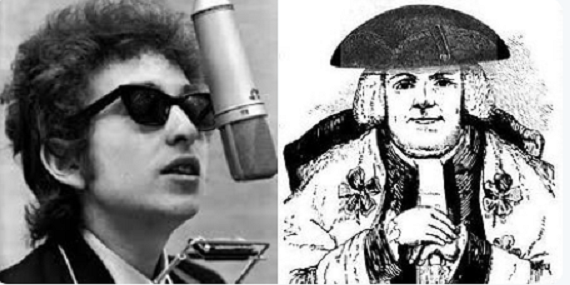 THROUGH a 17th Century traditional Scottish ballad, a connection exists between the Faculty and Bob Dylan.

The ballad is Lord Randall and it has a style of asking questions at the beginning of verses. The opening lines are:

Subsequent works have been based on the ballad and they include one by an 18th Century member of Faculty and another by Bob Dylan.

David Dalrymple was admitted to the Faculty in 1748 and was elevated to the Bench in 1766, taking the title of Lord Hailes. He wrote a balled called Edward. It opens:

Edward was included in Thomas Percy’s Reliques of Ancient English Poetry, a collection of English and Scottish traditional ballads published in 1765 which found much favour in Germany. The writer, Goethe was so impressed by the quality of the songs that he adopted the ballad style in more than 160 poems. The ballad which made the deepest impression was Edward and Goethe recited it at dinner parties.

Composers such as Schubert and Brahms arranged settings of Edward. Brahms was so taken by the ballad that he wrote two arrangements of it.

In the early 1960s, Dylan used the Lord Randall model for his song, A Hard Rain’s A-Gonna Fall. The opening lyrics are:

It was a track on The Freewheelin’ Bob Dylan , his second studio album, with the likes of Blowin’ In The Wind, Girl From The North Country and Don’t Think Twice, It’s All Right. The album is said to have “represented the beginning of Dylan’s writing contemporary words to traditional melodies.”