Scott purchased this manuscript for 15 guineas in 1809 at an auction at Sotheby's. The Legenda is a popular compilation of saints' lives, originally written in Latin in the 13th century by Jacobus de Voragine.

The Middle English poet Osbern Bokenham claimed to have compiled an English version of the Legenda, but this had never been found.

Dr Simon Horobin, a medieval scholar, has traced the origins of the manuscript to Clare Priory, where Bokenham was a friar, and the writing has been identified as that of the scribe responsible for another Bokenham text. The volume is lavishly illustrated and written on high quality parchment. It was probably written between 1450 and 1475 and intended for a member of the nobility. 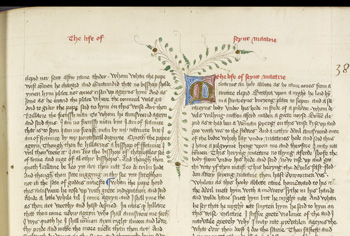